Iron is important for many reasons:

Healthy adults have 3-5 grams of total body iron, and only need to take in 1-2 mg per day. Once the brain and bone marrow are done using iron, the remainder gets stored in the liver, macrophages, and muscle.

Heme iron is the main type of iron absorbed, found in meat. Non-heme iron is absorbed to a much smaller degree, aided by vitamin C. The gut is the main site of regulation of absorption.

A 21-month-old child presents for a same-day visit with pallor, which has been present for a few weeks. The child took formula during the first year of life, but now drinks four or five 8oz bottles of cow’s milk per day. The family has noticed that the child often chews on cardboard books. Per chart review, the child had a normal CBC at 12 months of age.

Is prevalence changing over time?

Why are we still using race-based cutoffs? 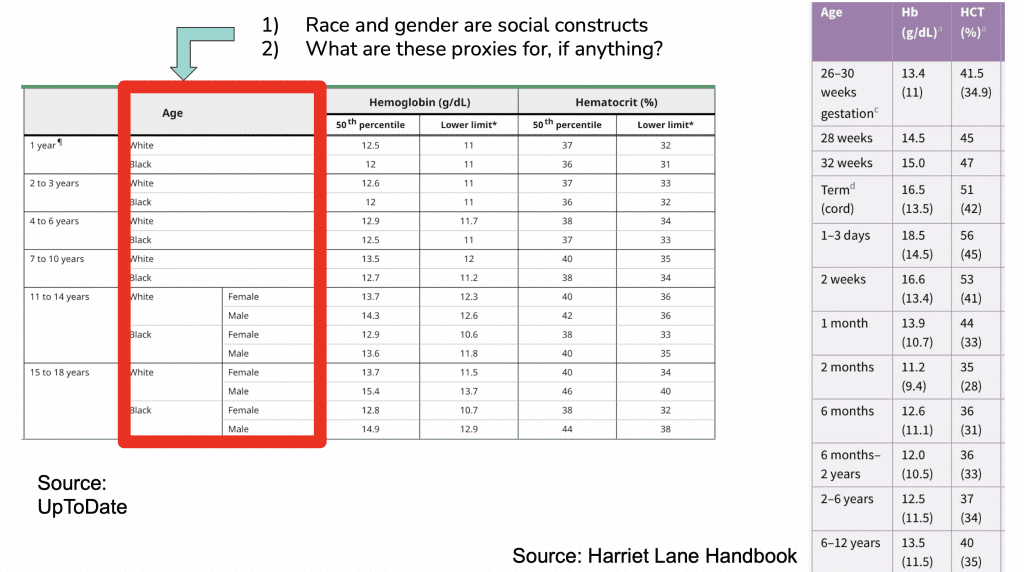 One recent 2021 study found that current WHO cutoffs to define anemia are higher than the pooled 5th percentile of Hgb among persons who are outwardly healthy and from nearly all survey-specific estimates.

What about sex-based Hgb cutoffs?

Screening (not just a CBC!)

Initial screening with risk assessment and CBC should be performed at 9-12 months of age. In the presence of low Hgb or risk factors, the AAP recommends labs specific to iron deficiency: ferritin, CRP, CHr. Alternatively, if anemia is mild, empirically treat and assess response.

In the presence of risk factors, screening should be repeated at 15-18mo of age.

In adolescents, additional factors should be considered:

Back to the Case!

After initiating iron supplementation, the patient returns to clinic after 1 month. The family says that they are giving iron 1-2x/week because of constipation when given more often.

Key point: Iron deficiency can be symptomatic without anemia!